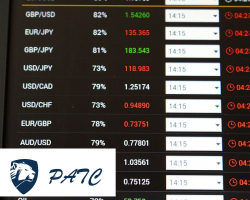 Individual investors who are considering participating in the foreign currency exchange (or “forex”) market need to understand fully the market and its unique characteristics. Forex trading can be very risky and is not appropriate for all investors.

It is common in most forex trading strategies to employ leverage. Leverage entails using a relatively small amount of capital to buy currency worth many times the value of that capital. Leverage magnifies minor fluctuations in currency markets to increase potential gains and losses. By using leverage to trade forex, you risk losing all your initial capital and may lose even more money than the amount of your initial capital. You should carefully consider your own financial situation.

A foreign currency exchange rate is a price that represents how much it costs to buy the currency of one country using the currency of another country. Currency traders buy and sell currencies through forex transactions based on how they expect currency exchange rates will fluctuate. When the value of one currency rises relative to another, traders will earn profits if they purchased the appreciating currency or suffer losses if they sold the appreciating currency. As discussed below, there are also other factors that can reduce a trader’s profits even if that trader “picked” the right currency.

PATC Have Extensive Experience with Forex – Chat to the Experts Now!

There are different quoting conventions for exchange rates depending on the currency, the market, and sometimes even the system that is displaying the quote. For some investors, these differences can be a source of confusion and might even lead to placing unintended trades.